Doing what they are getting paid for, why is anyone surprised! Most are nothing but skanks. 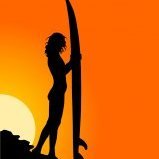 How many are actually a "couple" something else we will never know for sure. Seeing what some will do for money, doesn't surprise me.

Looks like Belle had Sofie come over give Nate another round of Blue Balls again..LOL  Like always..Sofie is full of shit and games.  I do wonder and hope that Stella gives him the real deal once she